"Everyone should be able to say goodbye in their own way"

The Netherlands’ very first multicultural funeral home opened its doors in early February. The Afscheidshuis Amsterdam Zuidoost. It was preceded by a year of discussions between people from different cultures, religions, background and communities. PKW Architecten made the final design for this complex Yarden project. Both the facade and the interior have been adjusted to suit the purpose of the building: a place of reflection for different cultures, in the middle of a busy, inner-city environment.

Vertical wooden slats hide the underlying glass shell on the northern facade that faces the street.

The first multicultural funeral home in the Netherlands has become a reality and has thereby fulfilled a long-cherished desire of the residents and the administration of the Zuidoost area and Yarden alike. “Although 160 nationalities are represented in this part of Amsterdam, there was no meeting place where relatives from these different cultures, religions and backgrounds could say goodbye to their loved ones according to their own wishes, faiths and funeral rites”, says Paul Verbruggen of PKW Architecten. “We were given the complex task of designing a building that is perfectly attuned to the principle of mourning, both inside and outside. For example, the construction of the facades is defined by its connection with the surroundings. After all, the building lies in the busy Amsterdam Arena neighbourhood, where lots of vehicles and trains pass by, but also alongside an office building. Inside, the space can be flexibly arranged and furnished according to specific wishes and tastes.”

When designing this building, the architect had to take the location and surroundings into account, and each facade was conceived in a different way. So, the west-facing facade, where the mourning cars arrive and the coffins are moved, is hidden behind fences and awnings, while on the south side, the aesthetic concrete facade contains several windows. This means that mourners still have a view of the surroundings without the employees in the neighbouring office building being able to see inside. “The northern and eastern facades, facing the street and the square respectively, have been designed so as to guarantee sufficient natural light without passers-by being able to glimpse at what is going on inside”, adds the architect. “On the north side, vertical slats hide the glass shell, and small windows in the auditorium facing the square allow light to enter while blocking the view from outside to inside.”

Various different windows were integrated into the aesthetic concrete facade on the south side. These provide a view of the surroundings, but at the same time prevent employees in the neighbouring office building from being able to see in.

Everyone is welcome here, from an old Amsterdamer who is a regular at the local pub to a Creole woman with a hoop dress. “The way of saying goodbye varies from culture to culture, from religion to religion, from community to community: each has its own rituals, its own way of grieving, its own music, its own food, …. There is therefore a modest Hindu mourning room with ‘slides’ and earthenware saucers containing unsalted butter that can be burned during the ceremony. It is also possible to mourn in a Ghanaian room, where fabric has been used to recreate the sky. The Afro-Surinamese community can sing as loudly as they want to on the evening before the funeral, without the neighbours being disturbed and filing a complaint”, explains Verbruggen. “Folding walls make the layout of the building flexible, so that a maximum of 400 people can fit into one room. The decoration is neutral and subdued, which allows everyone to prepare the space according to their own taste. Thanks to the versatile lighting and the possibility of projecting religious symbols, it is always easy to create a homely atmosphere. Furthermore, there is also a sound installation that is suited to the quiet tones of a modest service as well as the higher levels of a more exuberant celebration. The complex also contains several kitchens with a stronger extraction system than in most funeral homes, so that relatives can prepare their own dishes. There is a ritual washroom and even the toilets have been adapted to suit the large robes and headwear that some women wear during a funeral ceremony. A special pass gives you access to the building 24 hours a day.”

This multifunctional funeral home has everything to allow relatives say goodbye to their loved ones in their own way, according to their own beliefs and following their own funeral rituals. However, the building also fulfils the function of social meeting place, as people can come here for remembrance meetings, lectures and concerts. 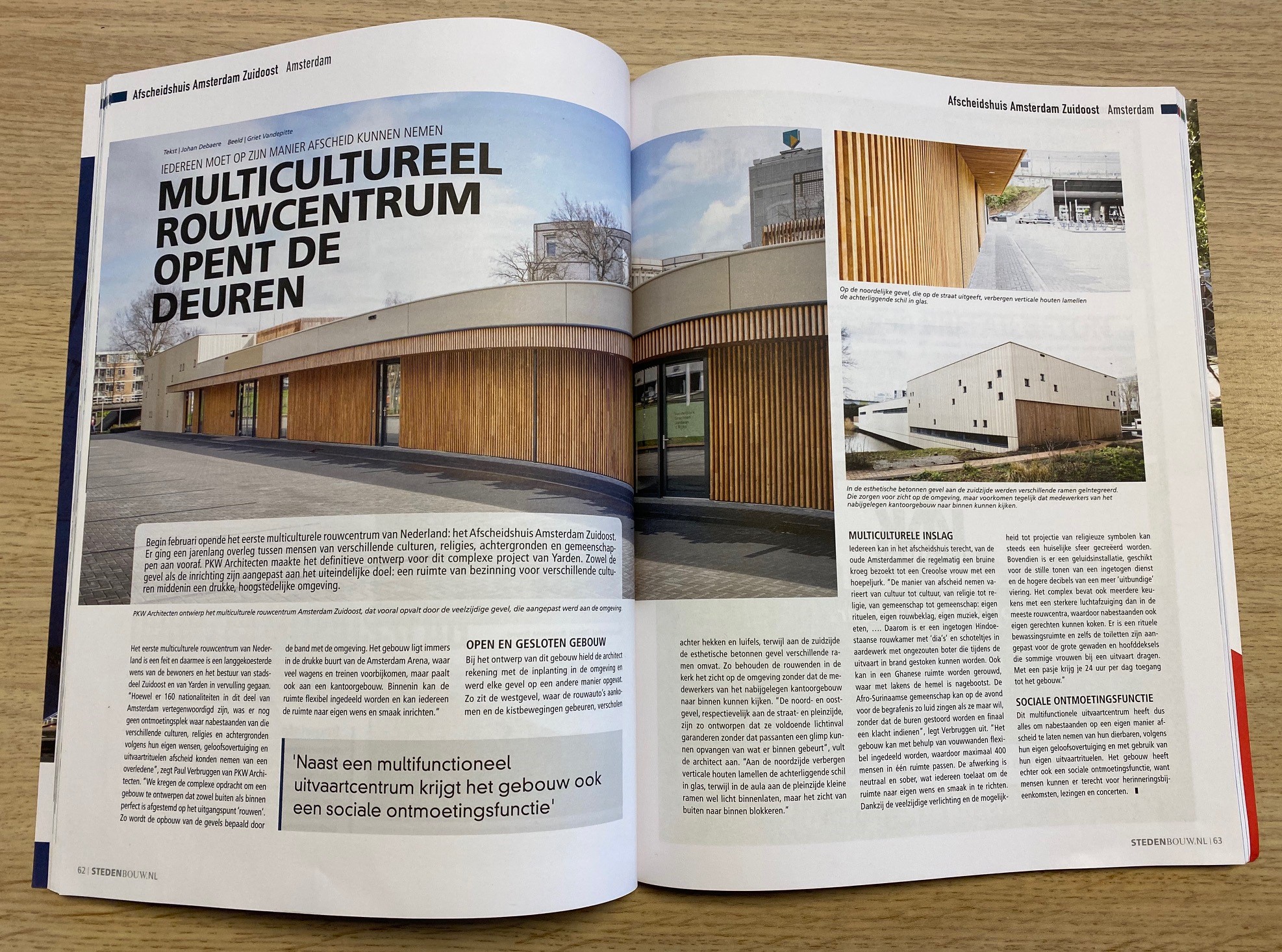